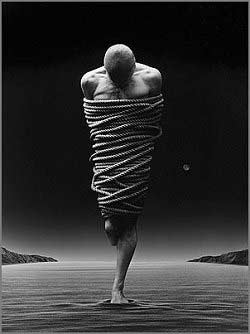 The immobilized hero lives in the city, yet he’s single and alone. No matter how he likes to observe others, he’s an outsider and doesn’t establish contact with people.
He is anti-materialistic, writes in the first person, holds few possessions, and he searches inside himself for answers rather than looking at the outside world.
Feeling superior to others, he’s rather frustrated that others ultimately can’t recognize him. On the other hand, he has a constant love-hate relationship with himself.
He considers himself an artist, regardless of whether he is or not, and believes that he sees the world uniquely with the whole truth revealed, which is the reason for his feeling of superiority over others.
The immobilized man is confined to his room, and is additionally immobilized by his inability to emotionally connect with other people, least of all women.
His accumulated frustration and anger usually results in suicide. By murdering himself, he’s actually killing the part of him that makes him a being like everyone else – a haunting thought for him.
A variation of the immobilized man theme is to be found in Dostoyevski’s ‘Crime and Punishment’, regardless of the fact that it was written in the third person.
The prevailing emotions in Noir fiction are: depression, apathy, fear, amorality, and paranoia. The Noir hero is the loser, the weak-minded, the psychopath, the sociopath, the obsessive and compulsive.
The character(s) are destined to suffer, to confront the darkness inside them. Whether they live or die is beyond the point; the core of swimming into this darkness is what matters.
As a literary reference, Noir can be used for any work – especially one involving crime – that is remarkably dark, cynical, complex and pessimistic.
After reading a Noir book, the reader is left with a bad taste in his mouth, a suspicion in the eye, and an anxiety at heart. Facing the darkness is not an easy thing to do, after all.
----------------------------------------------
Guest Blogger Sophie Novak  is a life interrogator, a curious soul constantly challenged by our world full of amazing surprises. She comes from Macedonia, the sunny heart of the Balkans, and recently moved to the UK where she works as a professional translator and likes all things literary.
Sophie Novak kindly agreed to be mentioned as a Guest Blogger on All You Can Write. You can view the original post on The Write Practice or follow Sophie's blog